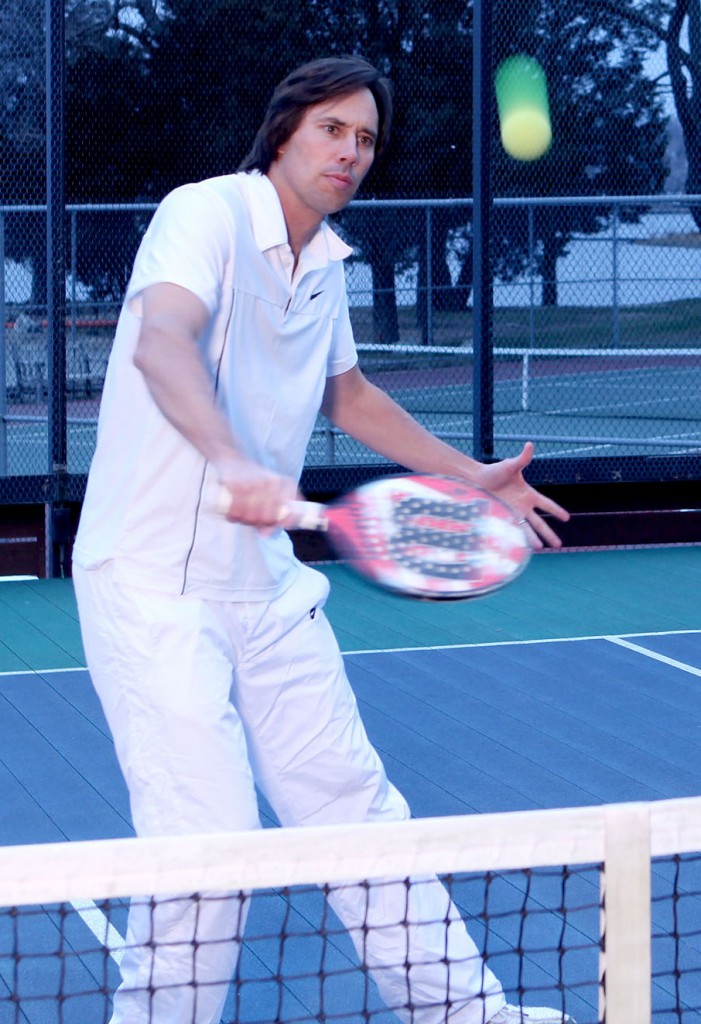 For professional tennis player Jared Palmer, picking up platform tennis at 40 is a new, exciting challenge. In his time on the ATP Tour, Palmer won 28 professional doubles title and one singles title, ranking as high as No. 1 in the world as a men’s doubles player and No. 35 in the world as a men’s singles player. It wasn’t until a fateful dinner party in 2009 that Palmer was introduced to the world of platform tennis.

Palmer had just moved from the west coast to Rowayton, CT. “I was talking to some of the guys at this dinner party. They were telling me about this game that they played outside in the winter. I thought it sounded kind of funny, but that I’d give it a shot.”

Palmer enjoyed the game so much that he began playing in a Thursday night league and a Saturday night league. He attributes picking up the basics of the game quickly to his skills as a tennis player and spending time on the paddle court with good friend David Caldwell. “I was fortunate enough to play with him, one of the best paddle players in the country. He showed me how the game is played at the highest level. That was great to see when I was first starting out.”

While the similarities between tennis and paddle allowed Palmer to pick the game up quickly and play at a reasonable level, it was the many subtle differences that brought him back to the court time and again. “It made it sort of fun right away that I could have good matches. That’s probably not true of a lot of other sports that I could try to pick up at age 40. If you play paddle, you know there are a lot of subtle differences between paddle and tennis. It takes a while to figure out. I’m still learning a lot.”

Come winter, Palmer would rather pick up a paddle game than a tennis game. “It’s something that’s relatively new for me and a good workout. It gets you outside in the winter. If I had a choice, I’d play paddle. I definitely play more recreational paddle than I do tennis in the winter.”

The draw is partly being able to play the sport at a reasonable level, and party what he still has to learn. “In paddle, I feel as thought when I get out there I’m improving and learning something – getting better. It’s different, but more fun for me. There are new shots to learn, shots that you don’t really make in tennis. And I like the chance to get outside in the winter.”

One of the players Palmer has most enjoyed watching is Johan Du Rant, a tennis player and a righty. In the two schools of paddle play, the first being a traditional, slower game, the second a more aggressive style, Du Rant belongs to the latter class of player. “Du Rant is very good at creating offense. It’s tough in paddle to win the point outright. The way that the court is set up – it’s small, and the ball is pretty lively and comes off the wires. It’s tough to put the ball away like you can in tennis. So when someone can do it, he stands out. There are a couple of guys who can do it, but he’s the best one I’ve seen at combining the ability to be patient when necessary and then be aggressive.”

The biggest difference Palmer finds between tennis and paddle is this balance between being patient and being aggressive. “You sort of have to retrain your brain to be patient. As a tennis player, you’re so accustomed to being able to finish the point, to being aggressive, to hitting a shot that you’re able to finish the point with. In paddle, against a really good team, especially if it’s warm, it’s hard to win the point. You can hit fifteen great shots and the point is still going. You can go for too much if you’re not careful. That’s been the biggest challenge strategically, learning how not to be too aggressive. “

After achieving so much on the tennis court, Palmer looks forward to what he can accomplish at some of the bigger paddle tournaments. While he won’t be able to make it to Nationals this year, he’s got his sights on getting there soon and having a great run.