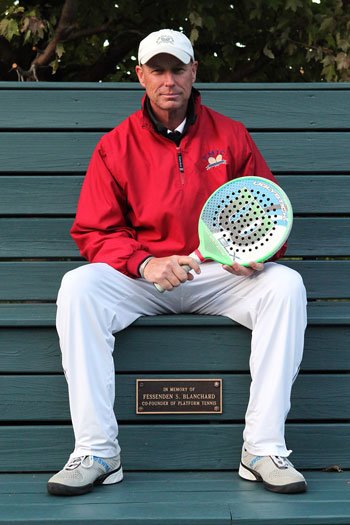 Gary Squires is a teacher; that’s what he does, that’s who he is. The current Fox Meadow Head Tennis and Platform Tennis Pro has been at it for 35-years. He grew up in Rye, NY and by his own recollection, was drawn to teaching at an early age.

“When I was growing up, we belonged to the Manursing Island Club. It was one of the three original clubs along with Fox Meadow and the Greenwich Field Club to get involved with paddle tennis. I learned tennis and paddle at about the same time, when I was eight or nine. As I got older there was a group of us who just played – nothing organized, it was pick-up. It was ‘let’s go down and play some paddle,’ “ recalls Squires.

“At that time, I remember how on many days I used to sit at the pro’s court and watch him teach. I sat for long periods of time just watching. I was fascinated by how he taught.”

Squires’ racquet skills grew hand in hand with his instructional interest. He would graduate from high school at the Trinity Pawling preparatory school where he took up squash. From there, he moved on to Hartwick College from which he graduated in 1981.

His first two or so years out of college he taught multiple racquet sports at the Downtown Racquet Club of New Haven and then at clubs in Carmel Valley, CA and Scottsdale, AZ.

“After those early years,” says Squires “I had the opportunity to work with Rossignol. They were well known for skis and ski equipment, but they brought out a line of tennis racquets and they hired me to represent them. I was a sales rep for awhile until I knew that sales was not my thing.”

Squires went back to what he loved, secure in the knowledge that teaching racquet sports was his thing. Head teaching pro jobs followed including a 7-year stint at the Greenwich Country Club.

Beginning in 1996, he assumed duties at the Apawamis Club, in Rye. It was while he was there that the demand for paddle instruction started to spike. “There was a time when I taught paddle everywhere in Rye and in the whole area,” Squires said. “I had been teaching since I was 18-years old so I had the experience. I had helped Bob Calloway with his traveling clinics and it was great to learn from him.” 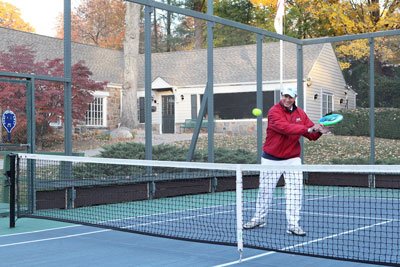 As interest in the game soared, the thirst for learning its basics sky -rocketed. Enter the young, highly skilled tennis players, products of both foreign and domestic training programs and substantial collegiate experience. Their transition from tennis court to platform grit has been close to seamless.

“It’s one of the biggest changes I have seen,” Squires says. “All these clubs have a pro now. Last year I split time between the Lake Club (Wilton, CT) and Fox Meadow. This year, the Lake Club got a full-time pro. But it just shows you how popular the game is because even though I’m only at one club, I am busier than I ever have been, running tournaments, leagues and other events at Fox Meadow.”

That Squires and paddle tennis would go together seemed ordained. If you want familial bona fides, he’s got them. His maternal grandfather, Witherbee Black, Jr. and partner Paul de F. Hicks won the National Men’s Doubles title in 1940 and were finalists in 1944.

Then of course, there was his father Dick Squires, the paddle legend who wrote the book on platform tennis – literally. He worked tirelessly as a promoter and player of the game throughout the ‘60s, ‘70s and ‘80s, at one point, over a two-year period, logging forty-three exhibition matches to open newly installed paddle courts.

He also edited The Complete Book of Paddle Tennis, a kind of platform tennis bible published in 1974. In it, he included instructional chapters written by some of the greatest players of his era.

Lineage does not guarantee passion and capability in any endeavor. Often, there is rebellion against it. Gary Squires’ passion for the game, however, is true; his own athletic ability real. It makes him comfortable in his own skin and therefore an enthusiastic, yet thoughtful commentator on the sport as it stands today and where it might be headed. In addition, as a paddle tennis first family member, he offers a contemplative, at times joyful, at times poignant personal window into a special era of platform tennis. 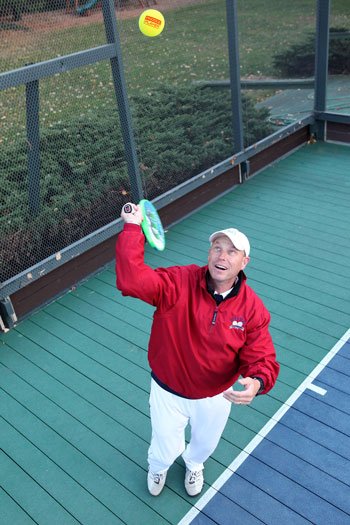 “My father never forced us to play,” Squires says. “When I was little and he was playing matches, I might hang around and after he finished, I would pull on his pants to let him know I wanted to play. Then he would hit with me because I had asked.”

“I couldn’t be a top echelon player the way he was – he won national championships in three different racquet sports: tennis, squash and in 1966 with Ted Winpenny, paddle tennis. But I did have teaching ability and I ran Junior Tennis Clinics for him as well as other teaching pros at the time.”

“He was a promoter. He tried to bring paddle to the public. He was witty and innovative and always thinking outside of the box. People would come out to see him do his thing. “

“As part of a promotion, he once landed on the Bronxville Field Club tennis courts in a helicopter,” Squires continues. “He set up a paddle court in the middle of Manhattan and one at the U.S. Open when it was at Forest Hills. He found sponsors and sponsorship money and even got into the business of building paddle tennis courts. He made some of the worst courts. They used a solid piece of plywood and it would peel.”

“But he loved the game and he wanted it to reach as many people as possible. We don’t have THAT guy, now but I see a lot more people promoting platform tennis. That is wonderful for the sport as more people are playing it at all different levels. It is so much fun to play and it is good to see that it has grown and is growing faster now because of the “easy going-ness” of the game.”

Squires agrees that an influx of high energy, highly talented young teaching pros is swelling the ranks of the paddle playing public. He also agrees that this surge in gifted players is helping to create a divide between the top-level old guard and the new professionals. But his main focus is what’s good for the game, the excitement it creates and the fun that results.

Development of juniors is growing, too. Sebastian Bredberg, the Paddle Pro at Wee Burn, has 160 kids he works with. “Without a doubt,” says Squires “the kids will help.”

As Squires looks to the future, he continues to teach, continues to build. He has made a living and spent most of his life laying the foundation that has created a groundswell of paddle tennis popularity, a groundswell perhaps precipitated by Dick Squires, the father, but fittingly brought to fruition by Gary, the son.