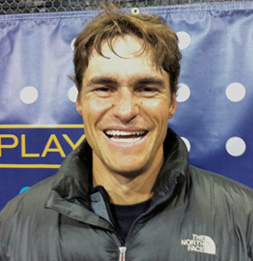 Johan du Randt is from Somerset East, South Africa and is currently the Head Pro at Weston Golf Club Massachusetts.

Johan went to college at Port Elizabeth Technikon, South Africa where he played number 1 singles and doubles for all 3 years. He got chosen to represent his country at college level in an International tournament. He also got a B.S in Marketing.

After his professional career he started teaching top juniors for 8 months alongside Pietie Norval a former number 1 Doubles player in the world. Then moved to America and taught, travelled and managed 4 ITF juniors in the top 100. During this time he started playing Platform Tennis won numerous tournaments as well as becoming the National Champion and runner up the following year. He is also a P1 certified paddle teacher.