A Link To The Past, A View To The Future

The first time Gregg Brents played “paddle” was in the summer of 1973, right after college, when he moved into an apartment complex that featured, among other things, a platform tennis court. It was in his hometown of Indianapolis, and Brents was a serious tennis player having distinguished himself on the courts at Indiana State University.

“I went out to play on the paddle court with my long time tennis sectional doubles partner, Mike Smart, from when I was growing up,” Brents recalls. “We were not aware of screen play at all. As we continued to play singles, we found local players, and discovered doubles and screen play. ”

His chance encounter with a paddle tennis court in some ways mirrored his introduction to tennis. “I didn’t play tennis until I was 13,” he says. “Up until then I played baseball. Both my brother, David and I would go out to Riverside Park in Indianapolis. We would finish with our game in one park spot, then walk over to the tennis courts where our father played and wait for him to take us home.”

“At first we didn’t play. Our reaction was ‘we don’t want to play that sissy game.’ But one day, our father told us he was going to play longer than usual so we picked up some racquets and began to play too.”

Brents took to the sport quickly. Possessed of athletic ability and an agile, analytical mind, he taught himself the game. He did a good job, too. After his college days, he travelled to Colorado Springs where he attempted to play more competitively on the national level. From there, his quest to improve his game took him to Port Lucie, FL where he briefly worked with Frank Froehling who had been a USLTA finalist at Forest Hills, NY (precursor to The U.S.Open) in 1965 and held a world ranking of 67 in 1973. A matter of months later, Brents secured the head teaching pro position at the Wellesley Platform Tennis Club in Wellesley, MA. By this time, he had shifted his focus to paddle tennis. “I met Dick Squires when I was playing tournaments throughout the mid-west,” he said. “I think it was at Fox Chapel in Pittsburgh.” Six weeks passed at Wellesley. Then in the fall of 1975, Brents got the call from Squires to become both head pro and manager of the new Apple Platform Tennis Club located atop a six-story apartment building on East 23rd St. in New York City. 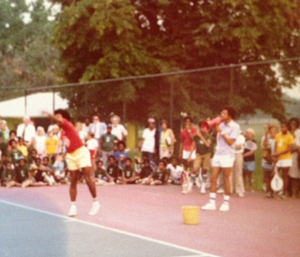 Greg Brents with Arthur Ash giving a serve clinic.
With the new job came opportunities for Brents to participate regularly at the highest level of tournament play. From 1978 to 1983, he and his partner, Greg Moore held down a #2 Men’s Doubles national ranking. “I reached the finals in the Men’s Doubles, Men’s Singles and the Mixed Doubles and lost in all three,” says a mostly regret free Brents.

“Greg Moore and I lost to Steve Baird and Rich Maier in four sets. Another time, in the Mixed, Wendy Chase and I lost to Doug Russell and Hilary Hilton. Then I lost to Russell in singles. I just couldn’t get over the hump.”

“Does it bother me not to have won a National Championship?” Yes … but I don’t lose any sleep over it.”

Brents potentially missed a golden opportunity to win in the 1976-77 season when he teamed with Rich Maier who also had yet to win the Men’s Doubles. They played well together. However, as summer approached, the #1 ranked Baird brothers disbanded leaving Steve Baird without a partner. “Steve asked Rich to play and the rest as they say was history. They went on to win a number of National Championships.”

It would be natural to speculate what might have happened if Maier and Brents had played together. Brents does. And he was naturally upset at the time. But once the die was cast, he moved on. Asked if he had considered teaming with Maier at a later date, Brents replied: “No, I never really wanted to partner with someone who had already won the Nationals. I wanted to be part of a new, fresh team.

Forty years playing the sport have left Brents with a slew of bright memories. “Two really stick out,” he says. “One was playing in the Passport Scotch 16-team Pro tournament in the 1970’s. We played in front of an office building in New York City to promote the game. The other was being a Finalist and losing in three sets at the first indoor tournament ever to be played. It was at New Canaan High School. Even though I liked the warm environment, I cramped badly before the end of the match. Not enough hydration! The fans were comfortable, though and the points were longer, exciting and more fun.”

Watching Brents play now, it is hard to believe he has reached the age of 62. He looks as quick and as sharp as the considerably younger players he competes against. What fuels his love of the game?

Two things: “Paddle is a fantastic chess match,” he says, echoing the exact same sentiment as Ana Brznova, who with Viki Stolaskova holds the 2013 Women’s National championship. “I grew up playing tennis on hard courts. It was a serve and volley game. You dictate the point and end it. In paddle, because of the wires, you have to play out every point. You can’t end the point, you need to win it.”

“Second,” he continues, “paddle is a better game for ‘the masses’ than tennis because you can achieve a quicker level of success and enjoyment.”

Gregg Brents’ career as paddle player spans the era of platform tennis “coming out of the Board Room” to where we are now, a time when the sport looks to explode, turbo charged into uncharted areas of expansion and popularity.

“Last year I drove over to Huntington, Long Island to see the Men’s Nationals. Huntington is the site where I blew out my Achilles tendon. It was the 20-year anniversary of rupturing my Achilles. I was playing with Andy Kinney and we had double match point in the first round of 1992 Men’s Nationals.”

“I was stunned at what I was seeing in today’s game. Today’s players seem to throw the traditional rules and strategies out the window. Specifically: playing back on serve because the returns are so huge now; at net, one player hits five or six overheads in a row while the other stays tight on the net; their hands and volleys are spectacular, not to mention the spins, slices and kill shots they use. There were just two shots like those back in the day, that only a few players owned – the slash that skidded into the corner by Mike Gillespie and Tom Smith’s drop shot. If any of my students had been there with me, they would say: ‘You don’t teach this.’”

Gregg definitely sees teaching issues with new changes in the game. “Now, where do you hit overheads? Where do you hit your lobs?” Brents muses. “With two handed backhands and incredible forehands, there’s no safe spot on the court. It makes the game greater. I think you still need the foundation of the old fashioned game. But I think my students would break their clavicles trying to copy Johan du Randt’s cut shots.”

Looking ahead, Brents is hesitant to forecast. “Nobody knows what the sport is going to look like in 10-years. But it still needs to be promoted. In my mind, with more and more highly skilled “professional” tennis players entering the game, surely they have connections to potential marketers and sponsors that would help grow our game.”

“I’ve given it some thought and I think that another huge driver to the expansion of paddle is summer league play. I really applaud the Paddleplayer.com summer league for providing an avenue of top-flight competition. It also brings together the talented new young guns with seasoned old schoolers like me. I love playing in the heat and love even more so the fact that paddle is fast becoming a year round sport.”

Today, Gregg Brents plays the game with ebullience, enthusiasm, engagement and an openness that brings the energy of youth to the present day. It makes his link to the platform tennis past and view to its future emphatically alive.

“Yes, the game is really changing quickly, “ Brents says, “ but there’s still nothing that beats a great lob!”